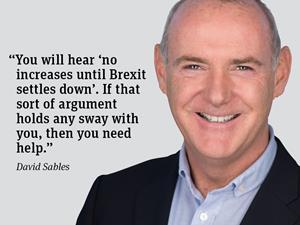 It’s one year on from the ‘Marmitegate’ cost price wrangle with Tesco. The anniversary is marked by a wave of suppliers thinking again about their next cost price increase. Bookings of our one-day CPI training programme are up 50% with suppliers wanting to exercise their pricing muscles.

Last year, even under the shroud of the weakened pound, many suppliers didn’t act, and those who did took a minimum ‘survival hike’ with little future-proofing. The pound never recovered and inflation is at its highest in five years, yet fear of the retailers means suppliers have left it. The first myth on CPI timing is that you can only do it once a year. You should do it when you need to. You risk more than the retailers if volumes tail off.

Again, I’m fascinated to see the nervousness of the approaches. We owed a debt of gratitude to Unilever for its blunderbuss blanket last year, which paved the way for the industry. Will anyone else step up to take the PR launch of this next wave of increases or is it enough that the retailers know it’s coming? Just because they know, however, will not make it any easier to communicate. It’s a discontinuity in your supply and retailers who need to appear cheap to their shoppers as well as build returns for shareholders, must resist. It’s their job. Accept that and know how to handle it. You’ll need three qualities…

Intelligence: be clear on your data and justification, then file it - retailers know this anyway. Empathy: show you understand the buyer’s viewpoint. Resolve: communicate specifics and hard dates without soft signals, then be patient, expect brinkmanship. You will hear “no increases until Brexit settles down” - if that sort of argument holds any sway with you then you need help.

The other myth is lead time; suppliers have trained themselves into believing 12 weeks is necessary. Four is fair.

Don’t make retail prices your problem. Pricing rolls forward when there is inflation afoot. Any alternative will lead to redundancies, declining food specifications or R&D cuts, all of which are worse stories than inflation.

Perhaps one day electronic shelf labels and collaboration will enable ongoing adjustments, but for now pricing pantomime season is upon us.